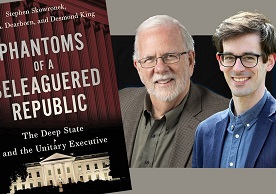 As president, Donald Trump took an expansive view of his executive power. He demanded loyalty of administrators. And when professionals in the federal bureaucracy appeared to defy his wishes, Trump and his allies accused “the deep state” of undermining his administration.

“Phantoms of a Beleaguered Republic: The Deep State and the Unitary Executive” (Oxford University Press), a new book coauthored by Yale political scientists Stephen Skowronek and John Dearborn, with Desmond King of the University of Oxford, examines the conflict between presidents determined to harness all executive authority and federal institutions that were created to promote shared interests through deliberation and expertise.

Skowronek, the Pelatiah Perit Professor of Political Science in the Faculty of Arts and Sciences, and Dearborn, a postdoctoral associate in the Center for the Study of Representative Institutions and the Policy Lab, recently spoke to YaleNews about their book. The interview has been edited and condensed.

Read the full interview by Mike Cummings in, “After Trump: Reining in the ‘imperial’ presidency,” published by YaleNews In Conversation (March 29, 2021).