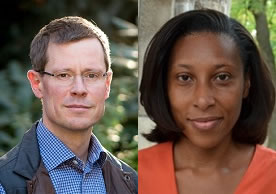 Two CSAP faculty affiliates were among the 252 accomplished individuals recently elected to the American Academy of Arts & Sciences.  Our congratulations go out to political scientist Gregory A. Huber and economist Ebonya L. Washington.

Those elected are “extraordinary people who help solve the world’s most urgent challenges, create meaning through art, and contribute to the common good,” said the academy in announcing the new members, who include artists, scholars, scientists, and leaders in the public, nonprofit, and private sectors.

“We are honoring the excellence of these individuals, celebrating what they have achieved so far, and imagining what they will continue to accomplish,” said David Oxtoby, president of the American Academy of Arts & Sciences. “This past year has been replete with evidence of how things can get worse; this is an opportunity to illuminate the importance of art, ideas, knowledge, and leadership that can make a better world.”

The academy was founded in 1780 by John Adams, John Hancock, and others who believed the new republic should honor exceptionally accomplished individuals and engage them in advancing the public good.

(Excerpts of this post were taken from “Fourteen Yale faculty elected to American Academy of Arts & Sciences” by Susan Gonzalez in YaleNews, April 26, 2021.)