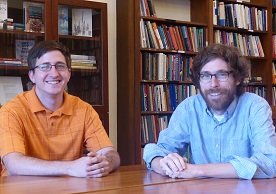 The Yale Center for the Study of American Politics welcomes our new postdoctoral associates for the 2017-2018 academic year, Scott Bokemper and Patrick Tucker.

Patrick Tucker received his Ph.D. in political science from Washington University in St. Louis in 2017.  His dissertation evaluated how citizens approached representation in a polarized world.  Using original panel data, he found that perceptions of a legislator on both a policy and non-policy dimension significantly change in response to perceptions of the legislator’s public effort.  Furthermore, even in a political landscape dominated by partisanship, citizens value more than ideological congruence when evaluating their representatives.  This ability of legislators to improve their image was not limited to co-partisans, but also effective with independents and citizens of the opposite party.  Finally, the dissertation extended these findings to examine differences between the public’s views of senators and House members.

Patrick’s research interests are broadly related to American politics, with specific interests in representation, public opinion, Congress, and the stability of political attitudes.  He expressed his excitement at joining the Center because of its reputation for fostering collaborative research and for its history of producing innovative and important work in the study of American politics.  “As a postdoctoral associate at CSAP, I hope to improve my empirical and theoretical skills to become a better researcher.  I also look forward to building collaborative relationships that will lead to new projects that seek to form a better understanding of American politics.”

Scott Bokemper earned his Ph.D. degree in 2017 from Stony Brook University and uses experimental methods to address questions related to poverty, inequality, social policy, and cooperation.  He is also interested in designing and programming novel economic games.  Scott was especially attracted to CSAP because it gave him the opportunity to work with Greg Huber, Professor of Political Science and Associate Director of the Center.  “I really admire the overall breadth of his [Huber’s] research and his past work using experimental economic games as a tool to study political science.”

Scott Bokemper also expressed his gratitude to the Charles Koch Foundation for generously funding his postdoctoral appointment at Yale.  “Their funding has given me a career opportunity that is truly unique and should be beneficial to my growth and development as a scholar.”