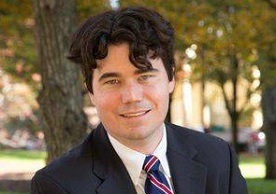 After spending two years conducting research as a Postdoctoral Research Associate in the Institution for Social and Policy Studies and the Center for Study of American Politics, Andrew Gooch is now teaching three courses in the Department of Political Science during the 2017-2018 academic year. Andrew’s expertise is in the fields of campaigns and elections, political communication, and survey methodology, and his courses offer a deep dive into these three subjects.

In the Fall, Andrew’s seminar entitled Political Polling and the Survey Sciences examines how academics and practitioners conduct survey research, from writing questions to sampling respondents and interpreting the results. Andrew’s course will take a two-pronged approach to learning about surveys that includes (1) the psychological mechanisms that drive individuals to answer survey questions in specific ways, and (2) the scientific underpinning of conducting and analyzing surveys in such a way that make the results accurate (i.e., is this poll “believable”? Why or why not?).The class will also pay close attention to the role of public polls in shaping election expectations with special attention paid to the 2016 presidential election. Lastly, the course will touch on the industry of polling and how candidates rely on public opinion data to craft their political messages.

In the Spring, Andrew is teaching a seminar in Media Politics and Political Communication and a seminar in Campaigns and Elections. The Media Politics seminar will examine how political actors use the media to get elected to office, promote public policies, and attack their rivals. In our modern digital world, media politics is no longer concentrated to the 5pm “nightly news” programming. Instead, significant effort is made to control a variety of media that may influence both voters and candidates, including: the daily news cycle, the weekly news cycle, cable news, talk radio, amateur bloggers, Twitter, Facebook news trends, hard news, soft news, local news, and maybe even fake news. Andrew will evaluate how these varying sources of media are shaping political communications.

In his Campaigns and Elections seminar, Andrew will cover a variety of topics including the nominating process, the general campaign, campaign strategy, voting behavior, campaign finance, the role of issues, the importance of the economy, the role of race and ethnicity, and the power of party identification.  These factors will be evaluated in mostly national level elections (Presidential and Congressional). In addition, Andrew will also compare and contrast the 2016 election expectations of academics and the media. Who was right, who was wrong, and why. On that topic, Andrew will also be highlighting original research about Donald Trump conducted with Professor Gregory Huber over the last year at the Center for the Study of American Politics. Lastly, Andrew will provide an overview of how data analytics for campaigns, which originated in academic political science, are now being used by campaign practitioners to win elections.