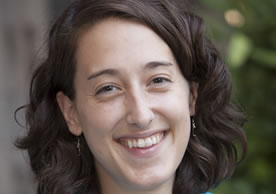 The Center for the Study of American Politics hosted a book conference on May 8-9, 2017 for Celia Paris, who received her Ph.D. from Yale in 2014 and is now an Assistant Professor at Loyola University Maryland.

Paris’s book, tentatively titled Madison’s ABCs: Why the Public Still Values Accomplishment, Bipartisanship, and Civility in Congress, focuses on evaluating whether, when, and why citizens are still willing to reward collaborative behavior by legislators. She uses existing survey data, original survey experiments, and a series of focus groups to examine how an increasingly partisan public interprets and reacts to what she calls “a more Madisonian approach” to Congressional decision-making.

“Madison and the Founders hoped that those selected to be legislators would interact with each other in a collaborative, deliberative way,” Paris says. “I knew when I started my dissertation that I wanted to figure if the public still cared about things like bipartisanship and civility despite partisan polarization, and I was actually surprised when I saw how much these ideals still resonated with the public.” Read more …

Paris credits her experience at the book conference with significantly reshaping the framing of the manuscript. “I had all these different ideas and neat findings in there, but they didn’t add up to a clear story. The participants gave me tremendously helpful suggestions about which pieces to bring forward, and I can already tell that my final manuscript will be much more compelling as a result.”