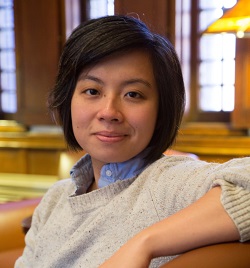 Abstract: This study aims to understand how a candidate’s national origin affects their perceived ability to represent Asian voters. Is it sufficient for Asian voters to be represented by an Asian candidate, as is suggested by much of the prior work on descriptive representation? This question is motivated in particular by news coverage of Kamala Harris’s election to the Vice Presidency, which highlighted the role of her Asian identity in promoting Asian turnout. To do identify the role of how an Asian candidate’s national origin background affects their ability to use racial- and ethnic-based appeals to promote turnout, I rely on a series of surveys and survey experiments which randomly emphasize the national origin backgrounds of two different politicians – Kamala Harris and Tammy Duckworth – and that of a hypothetical politician. I discuss three main findings. First, in the case of real politicians, while priming Kamala Harris’s Asian identity increases her perceived Asian-ness, it does not increase the perception of her ability to represent Asian American interests. However, priming Tammy Duckworth’s Asian identity does increase her perceived ability to represent Asian Americans. Second, using the profile of a hypothetical politician, I find that a politician who is Chinese or Vietnamese is perceived to be both relatively more Asian and more able to represent Asian Americans than an Indian politician. Finally, while Asian respondents agree that any Asian politician, regardless of national origin, will represent Asian Americans more than a non-Asian politician, this perceived group-level representation does not necessarily translate to feelings of representation on a personal, individual level by an Asian candidate compared to a white candidate.

Jennifer Wu is a PhD candidate in the Department of Political Science. Her research is concerned with Asian political behavior in American politics, with a particular focus on studying the role the pan-Asian identity plays in explaining variation in preferences and behaviors of Asians in the US. Prior to the PhD, Jen worked as a statistician in ISPS Health, and holds a MSc Economics from UCL and a BA from the University of Pennsylvania.

This workshop is open to the Yale community only. To receive announcements and invitations to attend, please subscribe at https://csap.yale.edu/american-politics-public-policy-workshop.